It was July 2000 and one could imagine the product manager’s frustration when he learned the news.  A hacker, going by the handle “Kingpin,” had found a vulnerability in the iKey® 1000*.  Furthermore, @Stake, a company associated with Kingpin was planning to go public with this information by publishing a security advisory.  The iKey® 1000 was poised to be a great success, and the last thing the Rainbow Technologies ** product manager needed was to have his information security device branded as “insecure.” 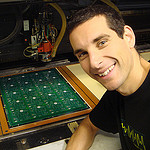 Fortunately, there was time to act.  @Stake had given Rainbow a grace period, just enough time to admit that @Stake had found something significant and to promise Rainbow’s customers that some necessary changes would be coming.    So, when @Stake released the advisory, describing the attack in sufficient detail for hackers to reproduce it, they also expressed admiration for Rainbow’s professionalism and responsiveness.

This was a consolation for Rainbow Technologies.  Of course, they would have looked better, if @Stake had not found the vulnerability.

* iKey® is a registered trademark of Safenet.
** In 2004, SafeNet merged with Rainbow Technologies.

To be continued in “Controlling Your Interfaces (Part 2)”

Well… here it is, the NetChime Research LLC blog, the blog about small intelligent devices that have proliferated through our lives.  We’ll try to keep this blog fresh and relevant.  So, if you have ideas on topics you would like to hear about, let us know.  We’re looking forward to making a contribution.