A group of designers built a number of 3D models of a toy robot using Rhino.  Next, they chose to build a reduced scale mock-up of their favorite design.    3-D printing is a great tool for rapid prototype development, because there isn’t the wait for tooling normally associated with other methods.  The 3-D printing process the designers chose was stereolithography.  This is was their model… 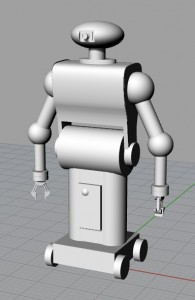 In stereolithography, an elevator floor is submersed just below the surface of a vat of a liquid polymer.  This substance has the characteristic that it will harden when exposed to a laser light.  The laser light is precisely focused and aimed to harden the liquid at specific points.  When the floor is just below the surface of the liquid, these hardened points will stick to the floor.  By scanning the beam over the surface of the fluid, a 2-D pattern of hardened points may be arranged on the floor.  After this is done, the floor is lowered slightly into the vat.  The laser scans the surface of the liquid again, attaching another 2-D layer of points onto the last layer.  This process is repeated, again and again, lowering the floor with each iteration.    After the last iteration, a 3-D form, consisting of stacked 2-D layers, can be found immersed in that vat.  The floor is then raised from the vat with the finished product resting atop.

This was the result of the designers’ effort, a 3-D prototype robot with no arms… 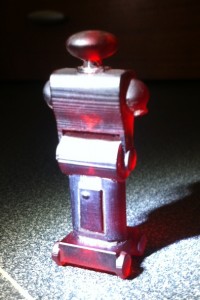 What went wrong?  When building prototypes with stereolithography, it is sometimes necessary to also design a scaffold to provide a layer for the other layers to “rest upon.”  The designers knew this, but designed a scaffold lacking the necessary rigidity to support the heavy robot arms.  Consequently, the scaffold flexed too far before the arms could be connected to the shoulders.

So, when using stereolithography for your next rapid prototype, remember to include a sufficiently strong scaffold to support the overhanging members.  Otherwise, your rapid prototype might not be prototyped as rapidly as you would have hoped.

One thought on “Prototyping with Stereolithography”