Continued from “Egad… Electronic Interference is Emanating From the Prototype!   (Part 1)”

He was reminded of his childhood, driving through the desert with his father, listening to music.  They had crossed over a river by driving over (actually by driving through) a truss bridge.  The radio went dead.  “What happened to the music Dad?” he asked.  His father, who had studied electronics in the Navy, said “Well son, this bridge is acting like a Faraday cage.  The metal is shielding us from the radio waves coming from the AM radio station. “ 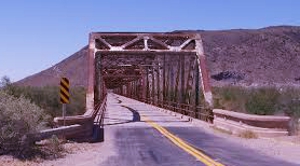 “Why can’t the radio waves get through the holes in the cage?” he had asked.

“You can’t see them, but radio waves have a size called a wavelength and a strength called an amplitude.  These radio waves are too big and not strong enough to get very far through the holes.  If we switch to an FM station, we’ll be receiving radio waves with a shorter wavelength.  These wave are small enough to get through the holes, and we’ll hear the music again.”  The old man flipped the AM/FM band selector on the radio to FM, turned the tuning knob and, sure enough, there was music again.

Remembering this, the electronics test engineer realized that a metal lid had been removed from the prototype to replace some read only memory (ROM) components.  He selected the FM setting on the radio, and the buzzing returned. He found the lid, bolted it to the prototype, and the buzzing sound stopped.  There really wasn’t a problem after all.  The necessary shielding was in the design, and it had been removed during the ROM replacement.  The electronic test engineer was thankful for his discovery.  He had one less problem to worry about.   He was also thankful for the nice memory of driving through the desert and being with his father.

Click here to see an interesting presentation on EMC.